What is it about underdog stories that empower people so much? In almost any movie plot the underdog usually has the audience by a mile, and capturing the audience within their hero’s journey plays a huge role in that. Meet Tyler Espitia, a real-life example of someone who has built an entire empire around himself and his businesses through some of his darkest moments. Tyler has become one of the most prominent traders on social media and has gone on to leverage the success of one industry in building a diverse arraignment of entrepreneurial ventures at only 23 years old. So what steps did Tyler take to build a name for himself as an entrepreneur beginning from a position of adversity?

Tyler Espitia began his entrepreneurial tendencies as early as high school, coming from a restaurant industry background out of Illinois. At the time Tyler was just learning about the stock market and how trading worked. So to create an income source for himself that would allow him to put his new-found knowledge to the test he ran the social media accounts of his parent’s restaurant, and to save up money he went and duplicated the process within other local mom and pop shop type restaurants. Whether it was social media management or running ads for the local shops, he was set on learning how to help, in order to continue fueling his trading journey.

While Tyler was learning the ins and outs of the market, his stepdad provided insight into the financial industry Tyler was immersing himself into. But just like everybody else, building that skill was one that didn’t come easy, what Tyler didn’t know before he started was the effects of emotions in the market and just how fast that could lead to a blown account. A lesson Tyler preaches all his students to master in order to truly understand how to leverage the market.

At 18 Tyler had already built a competent understanding of trading and investing, so armed with his new found knowledge he took off to LA on his own. It was at this time that Tyler was going to face some of the most difficult obstacles thus far. While still perfecting his skills in the market, Tyler was squeezing every last penny into his trades and investments to the point that he would experience a brief period of homelessness. Tyler has even gone as far as saying that he would date girls and pretend to be interested to get free meals, or even use all his money for food on a 7/11 pizza. This showcases the amount of commitment and dedication he had towards a dream no one could see but him.

They say the true test of a man’s character shines through in their darkest moments, and during this period self-belief was one of the hardest things for Tyler to conjure up for himself. While he was building grit and seeing his investments/Businesses grow day after day he attributes a huge part of his success today to the lessons he learned within those moments.

Building an Empire at 23

Today, Tyler Espitia is known as one of the most influential traders for his age with a Youtube channel of almost 10k and growing, as well as an Instagram following of 70k. His hard work and passion for his craft created a lifestyle of luxury vehicles, time freedom, and a platform to empower others on their financial goals journey. By building out an entire foundation around one skill and staying committed to his goals no matter what obstacles stood in his way, the doors and opportunities for growth have become endless. Tyler Espitia has created one of the best beginner-friendly trading communities through Ichimoku academy and has helped thousands of students across the globe learn trading through his no B.S realistic expectations within an industry filled with getting rich quick schemes. Although trading is Tyler’s main bread and butter, the 23-year-old is now focused on diversifying business ventures through industries such as Cannabis, Consulting, Several Startups, and even finding new ways to strengthen the communities around him by giving back.

It’s safe to say that Tyler is the embodiment of modern-day rags to riches story. His ability to overcome the hurdles he has faced puts the young mogul in a position to create a life of true fulfillment and success, as well as impact many others to do the same. 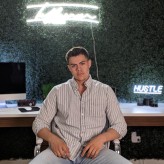 I share the stories of extraordinary people and their achievements