How did Sarah first find out she was made out to be an Entrepreneur?

Orlando native, Sarah Waldrop, has transformed into the woman she once could have only imagined. While she was still in school she sold candy, designed ripped jeans and anything else she can get her hands on. At the age of seventeen, she came across an opportunity that made her realize she carries a skill that is profitable. Sarah went to a party at a nightclub and someone came up to her and offered her a position as a promoter there. They agreed he’d pay her $1 for each person she brought in. The next day Sarah made it a point to print out flyers and reach out to everyone she knew. On week one she brought in around 1,000 people! It is safe to say this is where her obsession with money making started.

What did she do after finding out she had this special skill set?

Throughout the years, Sarah worked as a bartender, model and even a professional dancer. She juggled multiple jobs at a time, along with her MLM business. She was working 70 hours a week, seeing more money but less time. One day a guest at her job asked her where she saw herself in 5 years. She had no answer, no clarity, no vision and this was a huge reality check for her.  She instantly felt the fear of becoming a failure and really questioned “what am I doing?” He also mentioned he was making around $30k a month in MLM (multi-level marketing) and Sarah felt like there was no way this was possible… But she got into MLM anyways. She had to see for herself if this was possible or not.

Sarah eventually moved to California because she thought it would be a great opportunity for her. Due to her network marketing, modeling and dance careers, she already knew people in California so she didn’t hesitate to make the move. Shortly after moving, Sarah was faced with the fact that maybe this wasn’t the best move to make. Sarah was lured into fancy parties and events which lead to temptation and overall distraction of the bigger picture! She saw how people were acting, wanting to know others for their personal advancement not for genuine interest and she wanted out! Sarah knew she had to create something she had total control over and was her own, something she didn’t have to fake “liking” someone so she can advance her career.

When did Sarah really go all in?

One day Sarah heard a quote that made her finally decide to go all with her business ventures. The quote stated, “work part time on your fortune and full time at your job, where sooner or later your fortune will take over your job.” She immediately implemented this mentality to help her reach her goals.

She would come home from a gig and go straight to working on her side business. Sarah couldn’t wait to start eliminating each gig and one by one. She knew all this hard work and sleepless nights would eventually pay off.  It took a couple years. but IT happened, her “side hustle” officially turned into her main source of income!

With the company she is currently partnered up with, she has built a team of 1200 customers in 3 months producing over $300k in sales. Sarah mentored each and every one of them, to help them reach their financial goals. She also helps them build their online business and leverage artificial intelligence. The profit they make off the forex markets will help them be able to make further investments. Most importantly, help find their purpose by dreaming bigger and having more clarity for their future. Sarah generated her first 6 figure income all online which has allowed her to quit all of the jobs she had for the last 3 years now. She finally feels like she is truly happy and clarity for her own future. She has plans to continue to impact the masses and share her knowledge with the world!

Some advice Sarah would love to share with you:

“Always shoot higher, never think small. Think bigger and quicker. Encourage yourself to make more than just 6 figures and create the opportunities to get there. There is no shortage of money, just a shortage of people that aren’t thinking big enough!”

You can reach Sarah Waldrop at sarahgottalent@gmail.com or @sarahwallstreet on Instagram 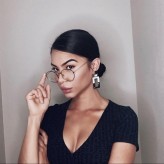