Little was known about artist EyeMan’s personal life until his unexpected rise to fame. While unknown to the world, the philanthropist singer had music in his blood since infancy. In fact, EyeMan had already decided on his pathway to a career as a musician from a young age. However, what catalyzed his move to finally pursue a career as a professional musician was his attendance at an Akon concert. He realized how enjoyable and intriguing it feels to sing as the crowd cheers on. He was so thrilled that he decided to pursue music in full blast.

Immediately after releasing his debut single,  Zayn, EyeMan’s fame started rising as fast as lightning. His song played all over Youtube, Spotify, iTunes, Google Play, and other social media platforms.

EyeMan dispels the myth about the originality of rap music. Although research would indicate that most popular rap music originates from the US, EyeMan has proved them wrong. Being of Canadian origin, he positively rose to the challenge and was rated #1 on iTunes. He rewrote the history that brought about a cultural revolution. His song Zayn has penetrated mainstream rap, allowing the global population to connect with Canadian music.

One of the most challenging experiences EyeMan has faced was the pain he felt after his brother’s death. He overcomes grief by pouring his heart into his music. As a result of these two events, EyeMan decided to pursue his entrepreneurship and music skills.

Listening to Zayn, you can’t help but feel the vibes brought about by the song’s tune. You will feel good as you dance to the song. The piece simply was embedded in such ease to create a complete connection with him. You will attest to how EyeMan connects with and sees the world through a unique lens.

Zayn was written based on a real-life story. EyeMan narrates it in a catchy tone, sliding it through the lyrics combined with strong beats. His energy when singing the song is from another world. The captivating way he releases each word, one after another, keeps audiences eager and curiously speculative about his next words. You will realize how sticky one gets to listen to his narrations until the end.

The artist looked into ways in which he can pass over messages to his target audience through songs. In one way, he wanted the world to connect through his story, and, at the same time, break the cultural barrier of language and music worldwide.

EyeMan’s drive is due to the values he upholds: living life to the fullest and enjoying every moment while pursuing your goals. The release of his debut single coincided with his son Zayn’s birth. Zayn has a literal meaning derived from ancient Egyptian and Arabic translations of beauty, grace, excellence, and a king.

EyeMan has completely transformed himself into one of the biggest celebrities in the Canadian music industry. Some of his songs have appeared on viral TikTok videos with over 2.6 Million views created by Kristen Hancher, who has over 24.5 million subscribers.

Besides music, EyeMan has Unga, his own clothing line. He was inspired to do good and earn donations, which will later be channeled towards helping Montreal hospitals.

EyeMan is characterized by following a strong work ethic and a resilient mindset. He is focused on achieving the impossible and pushes himself hard to make it in life. He looks into inspiring individuals, both aspiring to pursue music as a career along with other ventures. He values making an impact in all aspects to make the world a better place for all living things. 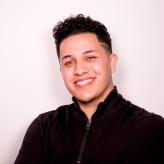