Vlad Tenev, co-founder of commission-free stock trading app, Robinhood, spoke this morning at the UCLA Founder School. The Forbes 30 under 30 and UCLA Math PhD dropout talked about the experiences that led him to cofound Robinhood, the trend that he sees in consumer products, and his personal portfolio of stock picks.

Tenev started the talk by mentioning that 90% of all financial trades are now managed by algorithms and that algorithmic trading tends to perform better in volatile markets because of wide spreads in a stock’s ask and bid price. Back in 2008, he started a company with his former Stanford roommate Baiju Bhatt in the finance space, but by the time that the company had was established a year later, the market conditions had changed so much that their ideas were not as effective. He followed up by creating another company, called Chronos Research, to respond to this shift in algorithmic trading much faster, helping big financial institutions like hedge funds and banks adopt algorithms at a larger scale.

Tenev then realized that the same technology that helped institutions make millions of commission-free trades a day could be translated into a consumer product. This eventually led to Robinhood. With Robinhood, Tenev and Bhatt wanted to start a new brand, since older players in the market like AmeriTrade and Etrade already had a bad reputation due to hidden fees and bad software. Brand affinity was almost non-existent for millennials.

The talk was followed by questions from the audience.

How should I network?

In the early stages (right out of college) it is really hard to network because you are unknown and have no track record. It is difficult to get someone’s attention and connect with them past a conference if you don’t have something to show for. Therefore, Tenev recommends spending more time shipping the product than networking. If you are exciting enough, people will come.

Crossing the chasm. It talks about how you should approach your marketing depending on which stage of growth you are in. Early-adopters care more about features whereas the mass cares about the reputation (“will this company be around for long”) and saving time or money.

How do you balance work and life?

Try to integrate your significant other in your activities. It is important that you have a supportive partner. Tenev mentioned that he probably doesn’t spend as much time visiting his friends and family as he would like.

Why are some countries/companies slow to adapt?

It is hard to change something that has already been established (it requires changes in policies, huge switching costs, etc). Some countries and companies can adapt much faster because they had nothing established yet and can easily adopt a technology.

What are the biggest threats for Robinhood?

A lot of people think that big institutions can wipe us out easily by offering commission-free trading. However, that would mean that the market is reacting to us and that we are the trendsetters. I believe being in a position where you are getting copied shows how valuable your product is. When Facebook tried to copy Snapchat and launched Poke, it only helped grow Snapchat’s popularity. A threat for Robinhood would be to not be able to deliver the technology that our users need.

What keeps you up at night?

Being the leader in the market. To stay ahead of the pack, you need to keep releasing exciting updates and push features. If you are not able to do so, then you become vulnerable and stop growing. Think of Dropbox for example, they had a great product but they stopped shipping new versions and they failed to integrate with other services and were quickly overthrown by Box and Drive.

Are you an avid trader? Which stocks do you own?

Tenev trades, but not a lot. However, he uses the Robinhood platform on a daily basis. The stocks that he has on Robinhood are probably the ones you are guessing right now: Solar City, Tesla, Apple, Linkedin, Chipotle, Google.

What do you see as the future in consumer products?

Startups currently are integrating technology as a layer on top of the physical world (Uber, Postmates, etc). So in the future we will see more services and industries arise that take advantage of the vast amount of data available. 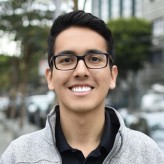