Hey! Can you tell us about your background story?

Shain: So, to start things off I was born in Guam. I know. Guam is a very long ways from Indiana. Life was a bit interesting to say the least from my perspective. I feel like before I even enlisted into the Marine Corps I had a diverse history with traveling. Born in Guam, then my family chose to move to Saipan. From there my father actually started taking me to his recording sessions since he was also an aspiring artist at the time. Always sang to me when he had the chance. I guess that’s why I’ve grown fond of melodies with music. Not to mention my little brother Reno was born in Saipan. He’s currently active duty with the U.S. Marines, so you can say Marine blood runs in the family. Forgot to mention my father is also a U.S. Marine veteran as well. Can’t forget that. Anyways, from there we moved quite a bit. A bit of California, Michigan, Minnesota, Indiana and so forth. I honestly thought moving around a lot was normal. Crazy. Fast forward to Indiana though I started my musical background purely in high school. My first song I ever wrote was for a biology project. Crazy part was I was persuaded by a few friends to do it. Things would have been extremely different if I didn’t go through with creating that song. Hopefully it is lost in the depths of the internet as I always say. That’s how it all started though. A biology project that I think I got a B+ in. After some time I kept at it with music creating small mixtapes with a few friends of mine at the time. We even created a rap group. Who doesn’t make a rap group with their friends, because I couldn’t of been the only one. Crazy thing is someone told me if I went solo and kept at it, then I would easily make it into the industry. After a few talks my friend Kyle persuaded me to go solo. Another choice that determined my whole future right there. Funny how all of that works in life. I won’t lie though it was rough. At times I was getting denied getting a listen to one of my free mixtapes in high school from my peers. Hits deep when you get a firm “no” from someone no matter who you are if it comes to your passion. After a while I didn’t know what to do with my life. Fast forward to January 2014 I ended up planning to enlist with the U.S. Marines. What a time that was. Fast forward to August 2016 I was stationed in Okinawa, Japan, and a close friend of mine.. Probably the closest friend I’ve ever had honestly, passed away. His name’s Darian Asher-Layman. That took a big toll on me. Especially the fact I had took leave to the United States a month or two prior to his death and spent time with him and his family. Even went to his daughter’s little birthday party. Still hits to me to this day honestly. His passing hit me with a choice after some time though. “What do you want to do with your life?” was the question I kept asking myself. Next thing you know December 2016 rolls around, and I release a demo song. The rest is history.

Can you tell me the story of your prior successes, challenges, and major responsibilities?

Shain: As a musical artist you’re going to have those big three looming around you regardless. Well, as long as you take your career seriously you will have those three. I could go on forever about everything from successes to failures with this. One thing that popped to mind though when it comes to a prior success story was me landing a collaboration with hip hop legend Mickey Factz. I have to give thanks to my producer Bluff Gawd for that assist though. I was in Dubai at the time for an operation for the U.S. Marines, and I got a message from Bluff asking if I wanted to do a track with a legend. I was baffled, because I had no idea who he was referring to. Next thing you know it was Mickey. How was I supposed to react? I obviously didn’t know what to do. All of a sudden I end up getting to talk to him myself. Mickey Factz!? Class of ’09 XXL Freshman!? This guy’s catalog is insane! Have you even heard his freestyles!? Pshh c’mon man culture up if you don’t. Anyways, that’s not much of a success story but it is a milestone I had accomplished. Challenges are always brought upon me. It’s almost like that’s what my life is full of. I would say a challenge was doing music while I was in the Marines honestly. Time management was the biggest issue for me. Couldn’t have enough time for everything. Which was a reason why a past relationship of mine didn’t work out. At the same time you have to do what you have to do to be successful. Sacrifices are always at large in this industry. It’s your choice to make them. If you’re strong enough to make them that is.

Can you tell me about a time when you almost gave up, how you felt about that, and what you did instead of giving up?

Shain: You know I gave up three or four times with this dream of mine. I can’t believe it took the death of my best friend to have me wake up and realize life is too short to worry. Granted I wanted to quit another time due to financial reasons. I felt sick to my stomach from that. Vowing myself to my brother that I’d make this all happen, and not being able to because of finances? Sickening. You know what I ended up doing instead? Obviously not quitting since I’m here, but what I ended up doing was expanding my income. Finding other ways to facilitate income on my end to reimburse it into an investment with my music. That’s the biggest thing for survival in this industry. To keep yourself afloat you cannot be stuck with one stream of income. You can oversaturate that income which then creates a living state you can’t escape from. I find it easier if you expand, because life choices become more lenient for you in the long run.

How can our readers follow you on social media? 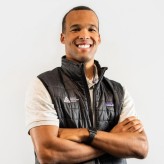