In this series, I interview the world’s most interesting entrepreneurs. Today, I had the pleasure of sitting down with professional wrestler and entrepreneur,  Dylan Bostic.

Dylan Bostic: I was born in Indianapolis and grew up in Shelbyville IN and was hooked on wrestling after the first time I saw it on TV when I was four or five years old. My mom met some local wrestlers when I was eight years old,and they gave her tickets for us to attend a local show. I started training when I was 12 years old. In June 2007, I had my first live professional match at 15 years old.

Christian Vind: I heard you tried out for the WWE! How did that go?

Dylan Bostic: It went absolutely amazing. I wrestled on WWE Smackdown in 2012. It just felt so amazing to get another opportunity with the WWE after all of these years. I promised 2012 wasn’t the end of me in WWE. It was the beginning. I’m hungrier than ever!

Christian Vind: What were some of your struggles as an entrepreneur, and as a wrestler? What are some things that you’ve done to overcome those obstacles?

Dylan Bostic: Being a pro wrestler you are your own brand and business. It’s been hard to get ahead financially in wrestling because there are only a few places to make good money in wrestling. I’ve used social media as a platform to make more money, and it has finally started to pay off.

Christian Vind: What does your theme song Champion mean to you? How has it made an impact on you personally and your career as a wrestler and entrepreneur?

Dylan Bostic: The song means so much to me because the lyrics explain my life. My entire life people have told me I couldn’t be a pro wrestler or ever step foot in the WWE and I’ve done everything people said I couldn’t do. The only thing left now is a successful run in the WWE!

Christian Vind: What are some things you would recommend a prospective wrestler who wants to turn pro do?

Dylan Bostic: Anyone who wants to be a pro wrestler needs to first become an athlete. If you aren’t attending a pro wrestling school right now, you need to be focused on gym and diet to prepare yourself. This isn’t easy!

I’m telling you no one is doing it like us… NO ONE! 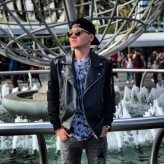 My name is Christian Vind. I was born and raised in Minneapolis, Minnesota. Featured in Inc. Magazine as a rising star in hip hop. In addition, I am a social media marketing specialist. Also known for being a rising star on Twitter @iamcvind!