Russell Whitney is an entrepreneur, philanthropist, best-selling author, and a recognized leader in business, real-estate investment, and financial training.

Favorite quote: “Safety is not required for your success”

So where did you come from? And how did you go from that to be the Guru’s Guru?

Russell Whitney: Well, it started when my father was a Real-estate guru on TV back in 1984, he was one of the first people to put out an intellectual property based on a how-to make money product. I remember living in a seven unit apartment complex and then moving up into a 16,000 square foot mansion on the water. So, my father took a thousand dollars and turned it into 4.7 million in real-estate and started teaching people his strategies and how they could make money in real-estate too. Then in 2002 I joined the company and started from the very bottom as a janitor, then worked my way up into customer service, then up into the marketing department, the events department, and by 2004 I was the youngest motivational speaker on the stage, being up there with everyone from Anthony Robbins, to George Foreman, to Donald Trump. It was great, I got to learn hands-on while scaling a company, and got my education from being mentored by my father. “Safety is not required for your success”

What kind of benefit do you think you gleaned from being the youngest guy in the room for so long now that you’re one of the vets?

Russell Whitney: I got to learn from experts that were already out there, while getting to learn from other peoples’ mistakes. It helped me shortcut the process when these older gurus would mentor me and help me make sure that I wouldn’t make some of the mistakes that they had learned from in their lives. And where I learned the most was from watching people who were not as good at teaching and educating. That helped me really pinpoint the holes they were missing, and how I could better that to communicate that to the client on how they could change their lives personally, and financially. Then, as I rose through the company working in every department, I found these holes, and used them to create better systems and processes. And after all this, I kind of learned through osmosis in how to run every part of the company. So now I can go into any education company that’s out there, in real-estate, stock, investing or internet marketing, and help them put themselves together, because I’d worked in every division from shipping to working directly with customers. I learned all of it hands-on, and now I have like a doctorates degree in events.

What are some specific secrets that you have learned that you try to pass on to anyone who asks you to give some advice on how to create a business, or how to speak better in public?

Russell Whitney: So, the first thing that I try to do is get them into the mindset. Because a lot of people don’t know what their true “why” is. What their true purpose is. And the “why” can be different for everyone. The “why” is “what do you feel you’re here on this Earth for? Not only for yourself but for the people who are around you.” That, because I’m a firm believer in the idea that the more people you help, the more money that you’re going to make. And how can you turn that “why” into a way to find your way out of that nine-to-five job, and become an entrepreneur, a business owner, or an investor. So, when I can help people find their “why”, whether it’s getting out of that nine-to-five, or spending more time with their families, or giving back to the world, then I can use that to help them find their purpose.

So once someone has the “why” what next?

Russell Whitney: The next part of the process is creating your goals, and an action plan, and a blueprint on how to do it. I don’t think anyone will find success unless they understand their goals, I really make people understand that reigning down goals is the most important part of the process. They also need to hold themselves accountable, and what helps them there is finding a mentor like myself or some of the other people out there that have been there. Mentors are very important because they are built to tell you not just what you want to hear, but what you need to hear. Then once someone has the “why”, their goals, and the investment in their education, I know that I can take anyone and help them become successful.

Did you have any real light bulb moments you’ve had where you think you really went from somebody who was there to learn, to someone who was learned?

Russell Whitney: Well, the biggest lightbulb moment for me by far was when I lost everything, because I didn’t listen to my mentors. Back in 2004, to 2006 I was doing very well financially through my real-estate investing, and then I lost all my money, and all my assets, and I ended up getting around the wrong kinds of people because I got into the doom and gloom. I became addicted to drugs and alcohol, and I was literally homeless on the street, begging for cash so I could go get high. Then I remembered my training and had a moment of clarity, literally, in a hotel room because I was in a paranoid-schizophrenic state from the drugs I was taking, and I realized that I am part of the people that I surround myself with. So, if I surround myself with drug addicts, I’m going to be a drug addict, and if I surround myself with millionaires, I’m going to be a millionaire. So, I reached out to one of my mentors to help me change my life and help me get back on track. So, I got clean and sober, have been for the past four and a half years, and in that period, I went from probably $200,000 in the hole to becoming a multi-millionaire. And the reason I was able to do that was because I reached out to my mentors. You are who you hang around with. Your network is your net-worth.

What would you say to someone who is in that darkest possible place?

Russell Whitney: You don’t have to hit rock bottom to get back up. The elevator is going down, but you can stop at any floor and get off. If you want true freedom, true happiness, you must surrender and realize that you are powerless over people places and things. A lot of times when people are suffering through addiction or are in any dark place, really, they are blaming everyone else. They’re pointing the finger at everyone else around them, but when you point the finger you do have 3 pointing back at you, you’re three times as guilty. Looking back on my own experiences now and what I’ve learned through my mentoring, I realize the part that I had to play in my mistakes. I’ve learned that you must put boundaries, so that you don’t set yourself up to be hurt and ever go back into such a difficult state. 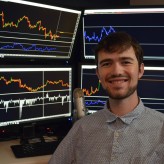